His Excellency Thierry Borja de Mozota, Ambassador of France to the Philippines, was the guest speaker at the special academic convocation of Silliman University held June 6, 2011 at the Claire Isabel McGill Luce Auditorium.

The Ambassador's talk on the role of an ambassador as a manager of a nation's interest in a foreign land and in identifying best ways of fostering its relations with its host government, contrary to what most perceive is of a “socialite”, formally opened school year 2011-2012. He said ambassadors facilitate understanding for their home governments of certain situations, decisions made, and actions taken by their host governments. This, he said, covers areas more than politics and economics.

It was the first time for Silliman to host an Ambassador of France to the Philippines. In his talk at the convocation, the Ambassador said he does not limit his functions to Manila, where the Embassy is located. He mentioned Tawi-Tawi as among the areas in the country that he has visited.

The Ambassador was with his party of two: Mr. Louis Thievenin and Ms Juliette Blouin, Director and Deputy Director of the Alliance Francaise de Cebu, respectively. France is one of 36 countries represented in Silliman by over 300 international students, out of an overall student population of over 8,000. French is also one of the foreign languages being offered in the curriculum. (To view more photos by Greg Morales, click: http://beta.su.edu.ph/gallery/photos.php?id=5615778058924337857.) 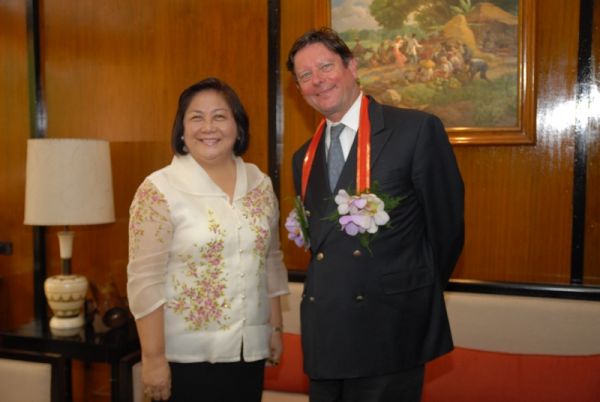 Singing Group to Perform at Gathering in Alaska