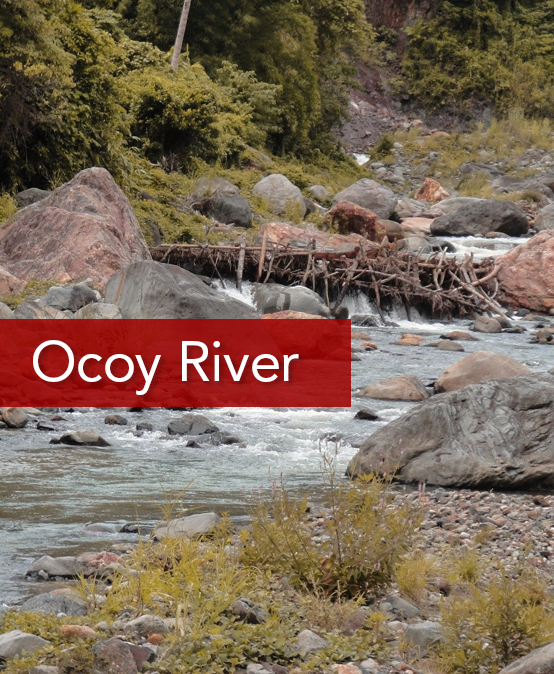 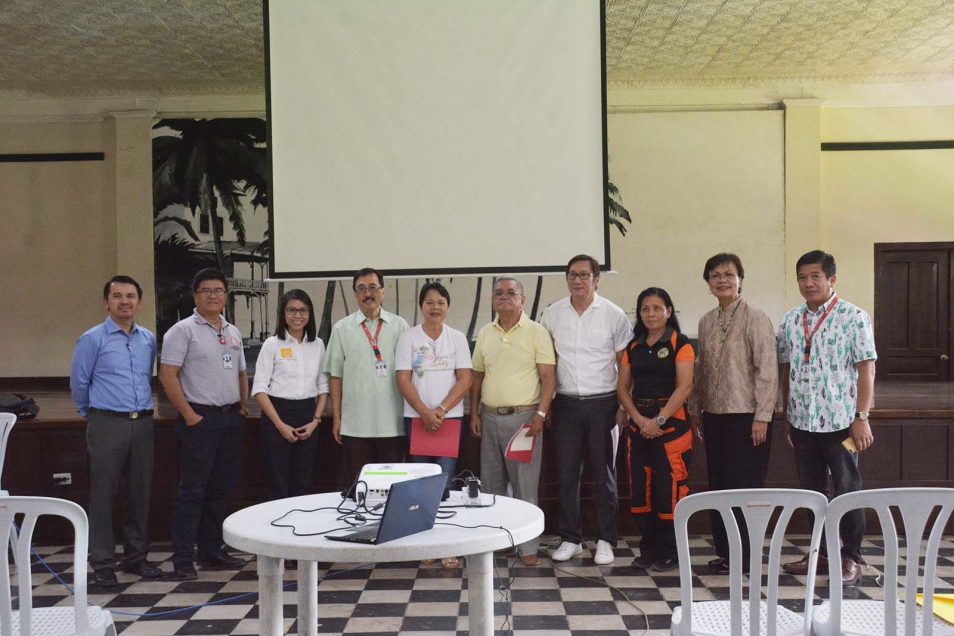 Silliman University (SU) recommended flood prevention and mitigation strategies for communities near Ocoy River based on its study on the communities’ settlement behavior and resiliency, which they presented to the local government units (LGUs) of Dumaguete, Sibulan and Valencia during a media conference, Oct. 14 at Silliman Hall. 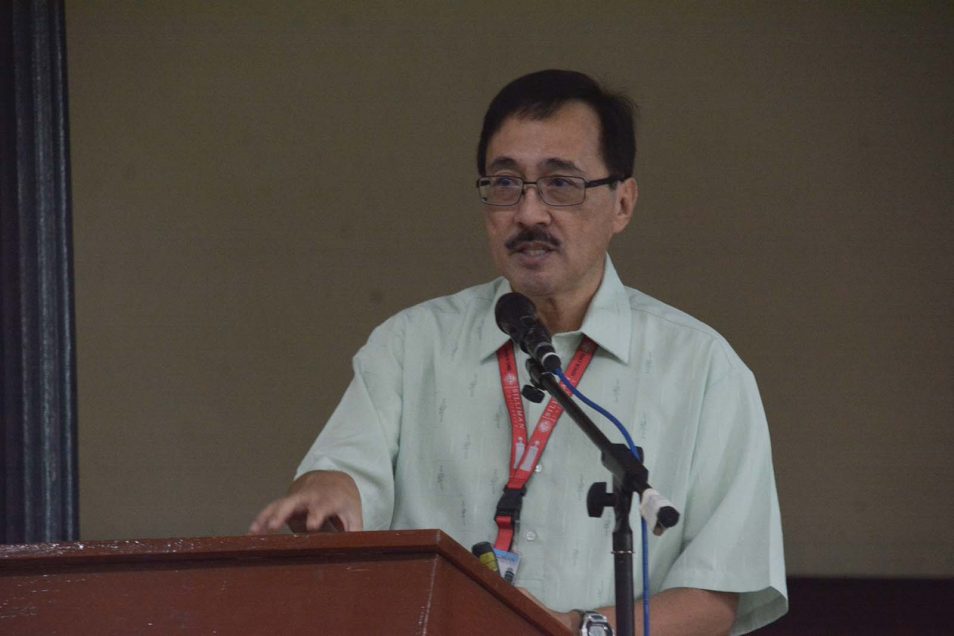 “The general objective of the study was to develop interdisciplinary tools to try to understand vulnerability and resilience…the behavior of people and…the problem of flooding…[and] put [our findings] into actual recommendations,” said project leader Dr. Jorge Emmanuel, a professor at SU Institute of Environmental and Marine Sciences and College of Engineering.

Emmanuel said the project’s recommendations were divided into four parts: preventing and mitigating flood and disaster; community preparedness; disaster response or what to do during a flood; and post-disaster recovery or what to do after a flood.

For flood prevention and mitigation, the researchers recommended identifying Ocoy River’s most vulnerable parts and having an improved flood control structure built with the latest engineering methods, among others.

Other recommendations include increasing public awareness on flood preparedness measures such as the use of go-bags; enhancing the early warning system; reviewing the safety of evacuation centers; ensuring the preparedness of Local Disaster Risk Reduction Management Offices and other involved sectors in rescue, response, recovery and relief operations; and training communities on first aid and basic life support.

“[In a disaster, if] somebody knows first aid, the chances of survival are much improved, so what we did with our project is we did a workshop for community leaders on first aid and basic life support so they can appreciate why this is so valuable,” said Emmanuel.

Ocoy River, which passes through Valencia, Dumaguete, and Sibulan, has a history of massive flooding that has caused deaths, injuries, and loss of property and livelihood. In 2011, the river overflowed due to heavy rains brought on by Typhoon Sendong, which caused a flood that killed 22 people.

Despite the dangers, people continue to build homes along the riverbanks.

“Climate change will increase the likelihood of destructive typhoons and the frequency of heavy downpours, which for the communities along Ocoy River would mean more exposure to dangerous floods,” said Emmanuel. “The project demonstrates the value of an interdisciplinary approach to tackling urgent problems,” said Dr. Enrique Oracion, SU’s Director of Research and leader of the project’s sociology/anthropology team. 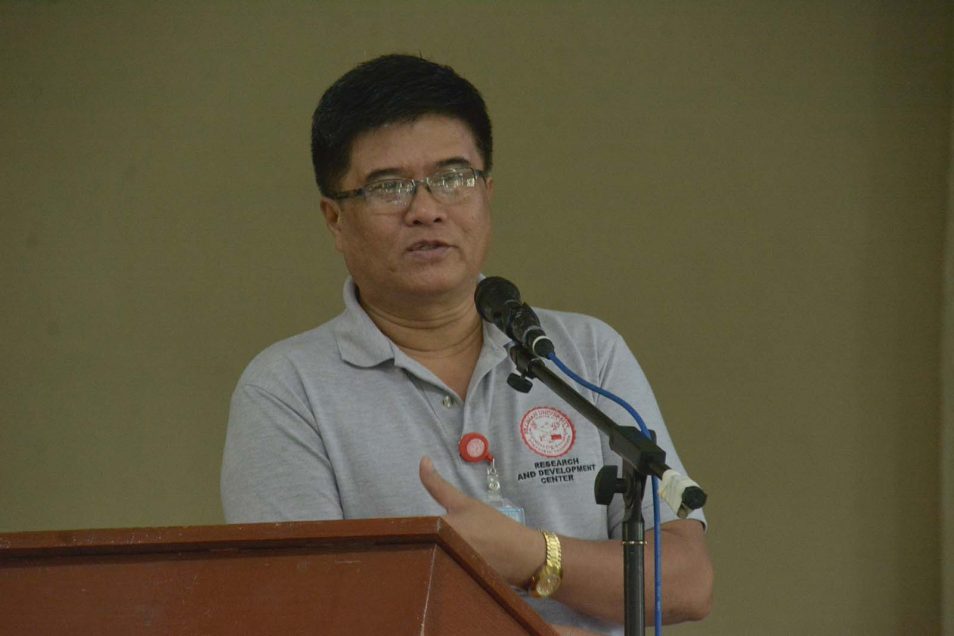 Among the tools developed by Dr. Oracion’s team were social survey questionnaires to understand the perceptions and “sense of place” of residents and businesses, which provides insight into why people remain in a place despite its perceived high risk and can guide policymakers on climate adaptive resettlement.

“We found out that all throughout the Ocoy River, people have a very strong sense of place, which is the reason why they don’t want to move out…If you want to relocate them, you need to build a sense of place for them in the new place. If you don’t do that, they will come back,” Emmanuel said. 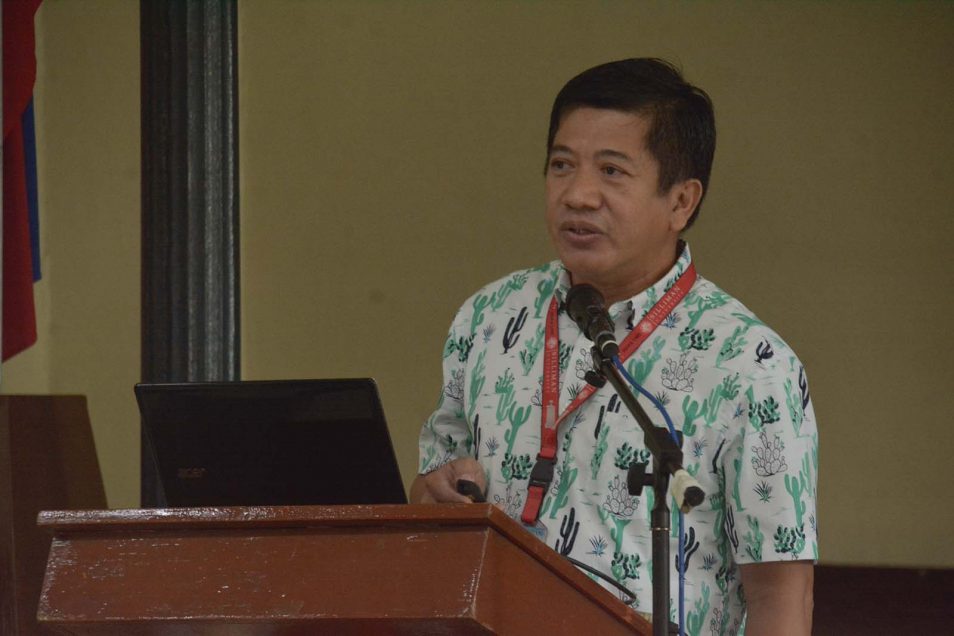 Meanwhile, the chemistry/biology team headed by Dr. Robert Guino-o helped train communities on the sampling of Ocoy River’s water. Emmanuel said the team found out that the river is not polluted but its water is high in coliform bacteria during the dry season, which could spread during floods.

As for the geophysical science/engineering team led by Emmanuel, they developed models of the Ocoy River Basin using open-source software to determine areas of high flood risk and reviewed the latest engineering design recommendations for flood control structures.

Emmanuel’s team also recommended non-structural measures such as increased forest protection, reforestation, and bioengineering approaches such as the planting of bamboo and vetiver grass along river banks. 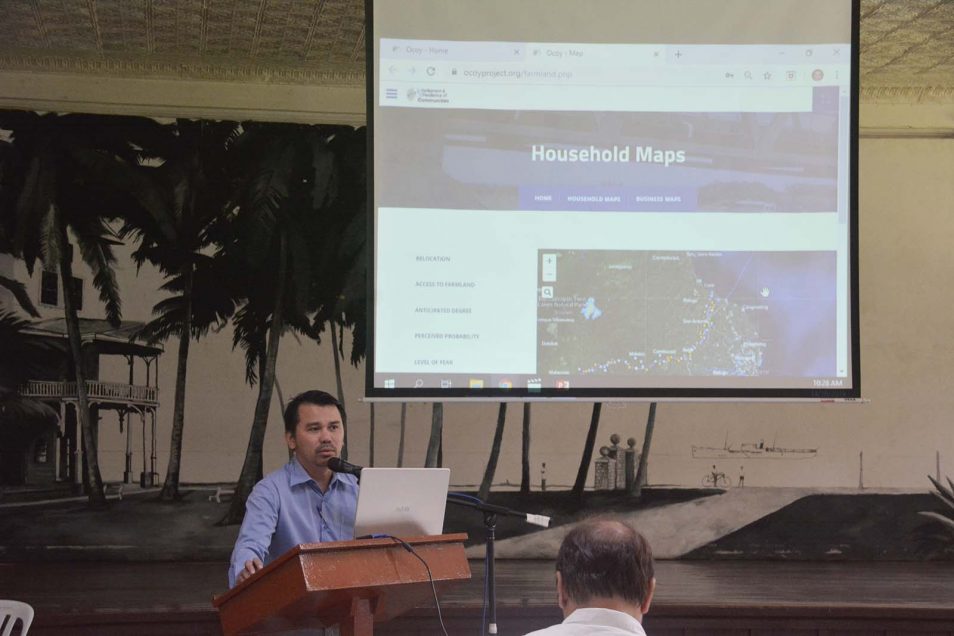 To compile and visualize the data collected by the teams, the computer studies team headed by Dr. Dave Marcial, SU College of Computer Studies dean, developed a web portal and database on the Ocoy River that can be accessed by the public.

Marcial’s team also developed a mobile application system that could be part of the province’s early warning system.

“We are introducing a new application called Siren, which was developed by [SU] students. It has an information board, early warning, and incident reporting system,” said Marcial.

Dr. Betty Cernol-McCann, SU president, formally presented the written recommendations to the mayors and representatives of the LGUs of Dumaguete, Sibulan, and Valencia during media conference.

“The university is committed to supporting the efforts of Dumaguete, Sibulan, and Valencia in

disaster risk reduction and climate change adaptation. We hope they will adopt the recommendations and will benefit from the capacity building activities provided by the project team as we work together to make our communities more resilient to climate change,” said McCann.

SU’s project, which took a year and a half to be completed, was funded by the Oscar M. Lopez Center for Climate Change and Adaptation and Disaster Risk Management Foundation, Inc. as the recipient of its 2017 Resilience Grant.

The project worked closely with Disaster Risk Reduction and Management officers and held numerous consultations with residents, businesses, barangay officials, and other stakeholders to come up with a set of recommendations, which were presented and discussed earlier with city and municipal officials, Sanggunian members, as well as provincial officials.

“To us, [this] is like a start…Silliman is still here, so hopefully we could work with the LGUs in the future on how to put or actually implement [our recommendations],” said Emmanuel.