Members of the Silliman University High School Class of 1962 unveiled their gift to Silliman, on the celebration of their 50th anniversary.

They gathered outside the Silliman Hall on August 24 to formally turn over a brass marker that describes and tells the history of the oldest building on campus. The marker is prominently located by the north entrance to the Assembly Hall, the ground floor of the Silliman Hall. 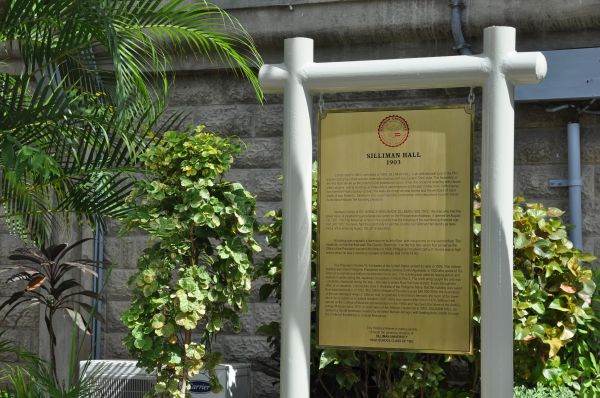 Constructed in 1903, completed in 1909, SILLIMAN HALL is an architectural icon in the Philippines being the oldest wooden American structure with the Eastern Stick style. The Assembly on the first floor served as the country’s first protestant church. It was the old-world dealing with classic steel columns, ceiling moldings and tiles which came from an old theater in New York. With inspiration from the Filipino bahay na bato, The walls are made of coral stones and the windows of capiz shells. It was Robert l. Sammons who supervised the construction with instructions from Dr. David Sutherland Hibbard, the founding president.

Named in honor of DR. HORACE BRINSMADE SILLIMAN (1825-1910), the man who had the great vision of establishing an educational center on the Philippine archipelago, it opened on August 28, 1901. This first American School in the country had the blessing of his overflowing financial support until 1907. He never had the opportunity to visit the country, but Silliman Hall stands as testimony of his enduring legacy, the gift of education.

A building was originally a dormitory on its third floor, with classrooms on the second floor. The Assembly on the first floor was the Church Room No. 1 on the first which served as the Office of the President, became the library in 1906. Philippine President Carlos P. Garcia was in high school when he was a dormitory resident at Silliman Hall (1916-1918).

Vice-President Charles W. Fairbanks of the United States graced its halls in 1909. This historic building welcomed Philippine Presidents including General Emilio Aguinaldo in 1920 who spoke of Silliman as la estrella que brilla en la education en el pais. This building was used as headquarters and detention center during the Japanese occupation in World War II. The north wing caught fire and was completely destroyed during the war- this side is where Ruiz Hall how stands. It was through the efforts of an alumnus, Commodore Jose V. Andrada of the Philippine Navy, that the building was saved from total destruction. In 1952, Mrs. Milton Stewart of Pasadena gave $40,000.00 for the restoration of the war-damaged wings of Silliman Hall. In gratitude to Andrada’s heroism, the room at the tower which he occupied as a student resident (1920-1926) was named after him in 1974. Silliman Hall served as the College of Business Administration in the 1960s and has been the home of the Anthropology Museum since 1970. In celebration of the Silliman Centennial in 2001, SILLIMAN HALL underwent a retrofit restoration headed by Architect Manuel Almagro with funding from USAID through the Center of Excellence in Coastal Resources.