Home \ Colleague Of The Week \

Not known to many, this senior professor studied Marxism and guerilla warfare in the Soviet Union for a year right after his college graduation, a few years before Martial Law was declared in the country. 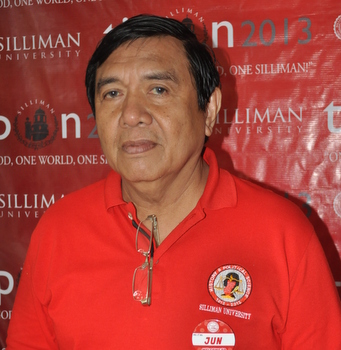 Prof. Carlos P. Magtolis, Jr. is the current Dean of the Office of Student Services. He completed his secondary education from Silliman University in 1964, where he recalls being charged five cents for every Cebuano word uttered. He registers as his most unforgettable experience being called  into the principal's office for striking a conversation with a friend in dialect.

Like how it is in the United States, students during his time greeted each other with either a “Hi” or “Hello” whenever they bumped into each other.

After graduating from high school, Carlos pursued geography for college at the University of the Philippines (UP) – Diliman. He left for UP along with her older sister, Prof. Leonor M. Briones, who was pursuing her Master of Business Administration there. (Professor Briones, “Liling” as she is fondly called, would later become National Treasurer. She is currently Chairperson of the Board of Trustees of Silliman University.)

While at UP, Carlos became involved in student activism and mass demonstrations condemning the Marcos regime, which later declared Martial Law in 1972. He was the general secretary Bertrand Russel Peace Foundation and vice president of the group Malayang Pagkakaisa ng Kabataang Pilipino. He was branded a communist. Due to his involvements, the Bertrand Russel Peace Foundation sent him to Moscow State University in Russia for a short-term course on Marxism, right after graduating with a degree of Bachelor of Science in Geography in 1968.

On his return, Carlos was offered a job at the Geography and Geology Department of UP. He was already headed for the office, when he was informed of a plan by the Metropolitan Command to apprehend him. With the help of his friends and the taxi driver, he was able to elude arrest.

The experience didn't affect Carlos' activism. He joined the underground movement and the Marxist-Leninist group. Eventually in 1973, he escaped Manila and returned to Negros Occidental, the hometown of his father. He came home looking for his family, and found them with relatives in the neighboring island of Cebu. From Cebu, Carlos brought his family back with him to Negros Occidental where they transferred from one location to another in hiding from the military.

It was in Negros Occidental where their family were able to establish a small agricultural. There, Carlos was also employed in a mining company; but this was short-lived as the company went bankrupt.

Mustering enough strength, Carlos traveled back to Dumaguete in 1976, not fearing any arrest or branding as a communist. He visited Silliman on his return to Dumaguete and met his former mentor from UP, Dr. Telesforo Luna, Jr., who was on campus for a seminar organized by the National Science Development Board (now Department of Science and Technology) at the Science Complex.

It was an opportunity for Carlos to explain to Dr. Luna why he wasn't able to show up for work that first day he was made to report to the Geography and Geology Department at UP. That meeting opened the door for Carlos to be endorsed to then Acting President Dr. Angel C. Alcala by Dr. Luna. Carlos did not waste time; he applied for a teaching fellowship at the College of Arts and Sciences (of which he later became Dean) in Silliman.

Carlos completed from Silliman his undergraduate in History and Master of Arts in History in 1977 and 1981, respectively. 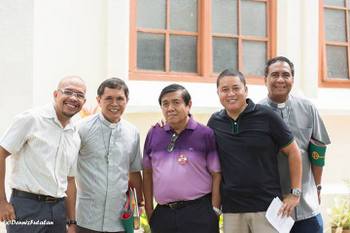 Despite the hardships that Carlos went through, and his strong activism, he never lost his faith. “In secret, I continued my faith and worship to God,” he said. And this was “rekindled” when he joined Silliman as a college student. In fact, Carlos is chairperson of both the University Spiritual Life Council and the Silliman University Church Council.

Carlos is happily married to Nona, with whom he has three children: Junna Yuri, Karl Mikhail and Advent Joy. Nona and Carlos are blessed with a grandchild from Karl Mikhail.

Let's get to know Carlos more:

What is your mantra in life?
“Philosophers have interpreted the world in various ways. The point, however, is to change it.

What makes you laugh/cry?
I laugh at my only grandchild’s gestures. I cry over the passing away of a dear one.

What’s your favorite time/day of the week and why?
Sunday, because it’s family day and church day.

What do you love doing when not working?
I just read or watch the National Geographic Channel and the History Channel.

What is your favorite hangout place in the University?
The whole campus.

What makes you blush?
None.

If you were an actor/actress, who would you be?
Dennis Trillo (who happens to be a son of my former high school classmate) 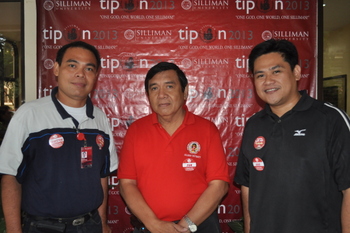 Tell us a fact about yourself?
I was given a medal at Kremlin in Moscow for Student Activism from the Soviet Union.

What is your idea of a relaxing day?
Watching movies.

What one thing would people be interested to know about you?
My stand on global and national issues.

What song best describes the YOU and the life you have now?
“Moon River”

What is the first thing you do right after waking up in the morning?
Brew coffee.

What’s your idea of a family?
Family is caring and loving.