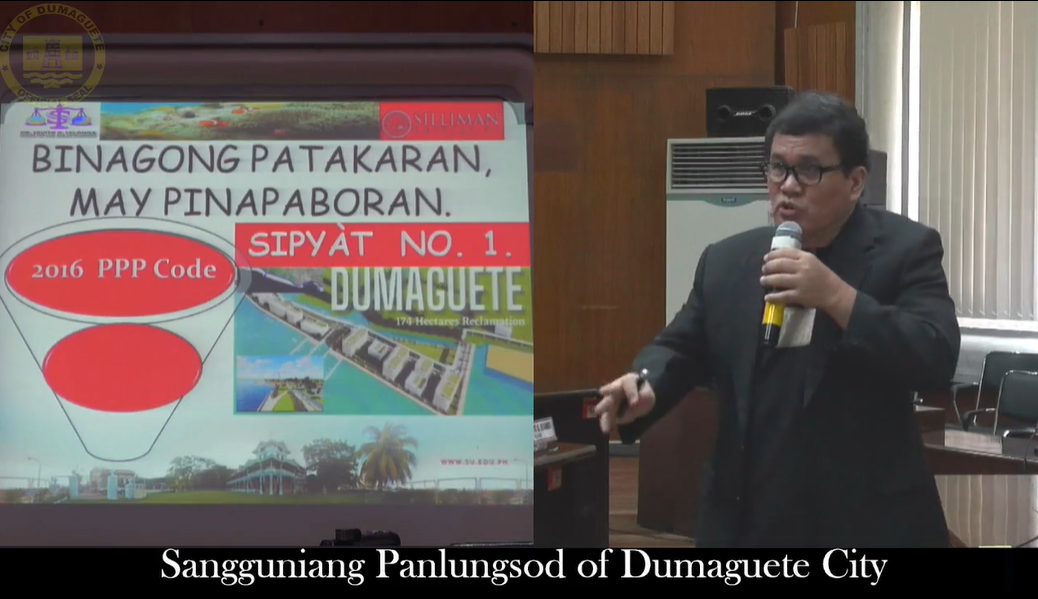 Atty. Eduardo Sedillo, a constitutional law professor at the Silliman University College of Law, explained the legal flaws of the proposed 174-hectare “Smart City” reclamation project in Dumaguete City in a presentation during the Dumaguete City Council meeting, August 11, 2021. 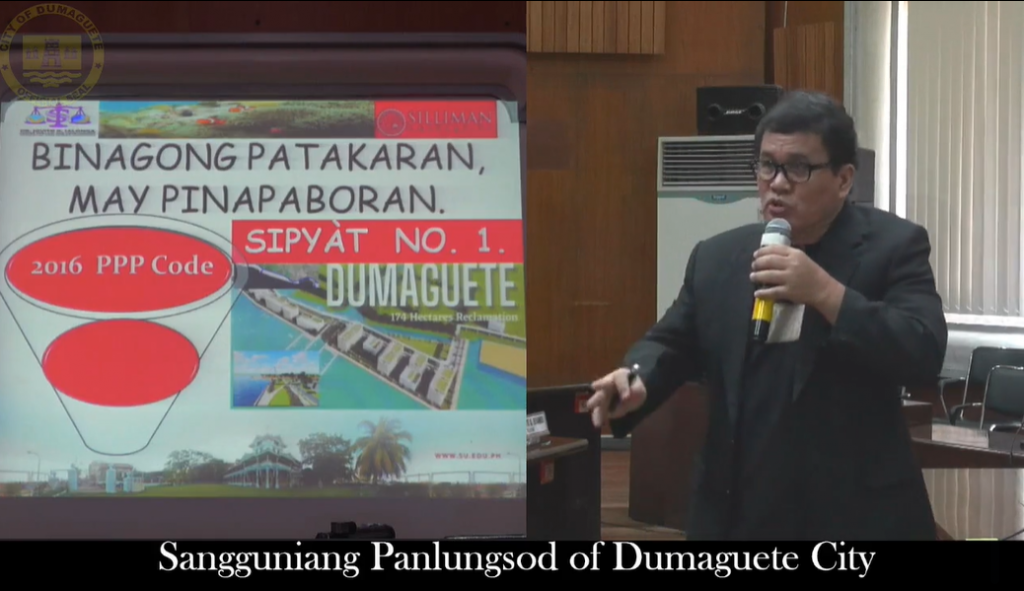 In his presentation titled “1 Question, 7 Lapses, and 4 Recommendations: May Nakatulog sa Pansitan,” Sedillo pointed out the “lapses” of the city government that prevents the proposed reclamation project from proceeding unless addressed.

In his presentation, Sedillo highlighted the failure of EM Cuerpo, Inc., the project’s proponent, to fully comply with the legal requirements for reclamation projects. He stated that this has been overlooked by the city government in the process of approving the project.

The first lapse, said Sedillo, is the enactment of a new Public-Private Partnership (PPP) Code early this year to replace the city government’s 2016 PPP Code which was the governing law at the time EM Cuerpo, Inc. submitted its proposal.

“In the 2016 PPP Code, we don’t allow unsolicited proposals for [Joint Venture Agreements (JVAs)]. In the middle of the transaction, we changed that,” said Sedillo.

In the timeline presented by Sedillo, the city council enacted the 2021 PPP Code on February 2021. Unlike the 2016 PPP Code, the 2021 PPP Code no longer prohibits unsolicited proposals for JVAs. This change in the law has benefitted EM Cuerpo, Sedillo said.

Sedillo pointed out that since the unsolicited proposal of EM Cuerpo for a JVA was made on November 25, 2019, it means that the proposal was still under the 2016 PPP Code.

“You can change your code, but you cannot change that midstream. You don’t change the rules of the game while the game is going on. You apply it prospectively,” added Sedillo.

Dumaguete Mayor Felipe Antonio Remollo maintains that the JVA, when signed, does not guarantee that the construction for the project will begin because the approval of the Philippine Reclamation Authority (PRA) and the Department of Environment and Natural Resources (DENR) are still needed.

“PRA will issue a Notice to Proceed…only then will the PPP contract be drafted…and presented to the city council for review, [then] approval by virtue of an ordinance. (After that,) the mayor will issue a notice to proceed. Only then will the project commence,” said Remollo during a press conference last July 14, 2021 at the Southview Hotel.

To address concerns regarding the approval of the city council last July 7 for Remollo to sign the draft JVA for the reclamation project, Remollo wrote to the city council on July 12 to request the council to change the title of the JVA to a “Memorandum of Understanding” (MOU).

In the said press conference, Remollo explained the changes in the new MOU, which includes Section 9.3 that says if the PRA and DENR deny the project’s application “with finality,” the parties will “waive all rights and obligations” under the MOU and the MOU becomes “without force and effect.”

‘Lapses’ in the process

The second lapse identified by Sedillo is that EM Cuerpo’s Chinese state-owned subcontractor, the Poly Changda Overseas Engineering Co., entered into a sub-contract agreement with EM Cuerpo on April 21, 2019, months before EM Cuerpo made an unsolicited proposal to the city government.

“Your 2021 PPP Code says that before there can be unsolicited proposals, the proponent must actually present a feasibility study and a draft PPP contract,” he said.

The fourth lapse, said Sedillo, is that the Swiss Challenge or the Competitive Challenge for the proposed reclamation project that was initiated by the city government last April 29, 2021 has no “basis” because EM Cuerpo did not submit a feasibility study.

A primer on the Dumaguete reclamation project published by SU College of Law’s Salonga Center states that the Swiss Challenge is an alternative selection process wherein third parties are invited to “submit comparative proposals to an unsolicited proposal.”

Sedillo also drew attention to EM Cuerpo’s lack of a “track record” in constructing reclamation areas and said it has “no financial capability” to fund the P23 billion project.

Based on the MOU of the Dumaguete project, EM Cuerpo will completely shoulder the P23 billion project cost.

As mentioned in the Salonga Center’s primer, the estimated net worth of EM Cuerpo based on its financial statement dated December 2020 is about P1.4 billion.

Sedillo argued that with EM Cuerpo’s lack of financial capability to fund the project, the Manila-based construction company might be a “dummy” of its subcontractor, the Poly Changda Overseas Engineering Co., which is a subsidiary of the China Poly Group.

The China Poly Group is a large-scale state-owned enterprise that ranks 174th in the Fortune Global 500 list, which ranks the world’s biggest companies.

For the fifth lapse, Sedillo reminded the council of the Anti-Dummy Law which penalizes violations of the laws on the nationalization of certain rights, franchises, or privileges.

“[The] Constitution prohibits foreign corporations from…exploring, developing, and utilizing natural resources. The sea, before it is reclaimed, is part of the natural resources,” he added.

The sixth lapse Sedillo called attention to is the Philippine Port Authority’s possible objection to the project because it will “affect the navigation” of ships coming in Dumaguete.

For the seventh lapse, Sedillo questioned the division of ownership of the reclaimed area since the project is open to investors.

Sedillo also called out the city government, specifically Remollo, for using the Cebu South Reclamation Project’s (SRP) Environmental Compliance Certificate (ECC) from 1995 as an example instead of explaining how the Dumaguete project will mitigate environmental damage.

“I heard this from the media and from (our mayor). (He said) the smaller Dumaguete offshore land reclamation of 174 hectares could be mitigated as Alcala and Malayang had done so in the bigger Cebu SRP…This is technically and legally flawed and is actually a ‘squid tactic,’” said Sedillo.

Sedillo called this a “squid tactic” wherein instead of answering a particular question, the person diverts to other topics.

In his presentation, Remollo said: “This is a 330 [hectare reclamation project]. Doble ni sa size sa atong proyekto. Ngano mang gi-issue-han og ECC? Pasabot diay ana, dili dautan ang reclamation basta lang naay maayong, valid ECC.” (The Cebu SRP is double the size of the Dumaguete project. Why was it issued an ECC? That means a reclamation project is not damaging as long as there is a valid ECC.)

Remollo used the Cebu SRP’s ECC as a reference as to how the Dumaguete project can mitigate environmental damage, using measures such as artificial reefs to replace those that might be damaged.

“We know, because of this template (Cebu SRP’s ECC), it can be done…Reclamation can co-exist with the preservation of the environment provided that you follow all these measures,” said Remollo.

However, Sedillo said in his presentation that using the Cebu SRP ECC as a template is “flawed” because ECCs differ depending on the project and the project site.

“ECCs cannot be cut and paste across projects in different sites because each ECC application is always ‘sui generis,’ a class of its own…[Conditionalities] and [environmental condition] is different all around the country…Science and social acceptability [have] since evolved. What was scientifically and socially acceptable at one time or in a place, may not be so in some other time or some other place,” said Sedillo.

Sedillo echoed SU’s opposition to the reclamation project because of the existing marine ecosystems in Dumaguete’s coastline that will be disrupted and damaged by the project.

On the potential environmental damage of the Dumaguete project, Remollo said during the same information drive: “Dili pa ta muhusga kay wala pa man tay mga studies, mga detalye kung asa ning mga maigo,” said Remollo. (We will not prejudge the proposed project in Dumaguete because there aren’t any studies as to what will be damaged.)

Remollo also showed that the Cebu SRP’s ECC was signed by SU scientists Dr. Angel Alcala and Dr. Ben Malayang III, who were then DENR secretary and undersecretary, respectively.

Alcala and Malayang were among the first group of experts from SU who expressed their opposition to the Dumaguete project because of its potentially damaging effects on the marine ecosystem of the Dumaguete coast, which were listed in a public statement based on their expertise and studies as marine and environmental scientists.

To correct the lapses, Sedillo recommended that the city council withdraw the authorization they granted Remollo to sign the MOU and that the council “deny with finality” the proposed reclamation project.

OSA: A Celebration of Stewardship