This year, a new service at Silliman Church was held to celebrate All Saints’ Day and All Souls Day. It’s called a Memorial Service, which was not exactly new as this was done at the Dumaguete Memorial Park in the past years. What was different besides the setting, were dimensions in the celebration. The Church gathering on the 1st day of November allowed families to have a more solemn worship to express gratitude through songs and prayers of thanksgiving for the fruitful lives of their loved ones and friends who have returned to their Father in Heaven. During the service, families brought baskets and jars of flowers for a ritual of blessing of these arrangements before these were brought to the different memorial parks in the city. The worship service also gave an opportunity for others who are away from home to have a specific venue to remember their departed loved ones. Many found the worship to be meaningful and they are hoping that it will grow to become a tradition at Silliman. 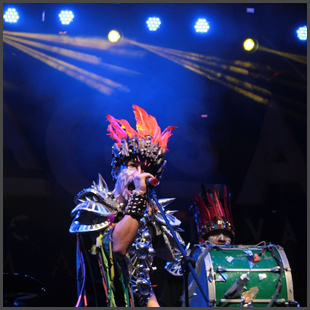 DUMAGUETE FIESTA in November was highlighted by Dagsa, a two day festival of new Filipino music. The festival which opened with the performances of Silliman’s Ating Pamana and the Silliman University Kahayag Dance Company. The two-part music celebration from November 9 to 15 kicked off on November 9 with Muchikahan Live hosted by national artist Ryan Cayabyab at the Father Louis Chauvet Hall in St Paul’s University. The biggest event was at the Rizal Boulevard, which was totally closed by 4pm to traffic to accommodate an all-night dance and music fest featuring the Philippines’ finest in Original Philippine Music today. Cool beats and live tunes were provided by DJs Red-I and Soulflower, Tropical Depression, Gruppo Tribale, Artstrong, Quest, Pedicab, Sandwich and Rico Blanco. It was capped off by a pyrotechnics show.

A total of sixty (60) aspirants – thirty (30) singers and thirty (30) songwriters from all over the country were accepted as the 2012  ELEMENTS participants. They formed the third batch since 2010 to be accepted into this program for aspiring musicians in a camp-like environment of learning. More than twenty (20) mentors joined the campers in Dumaguete City in November. ELEMENTS was again 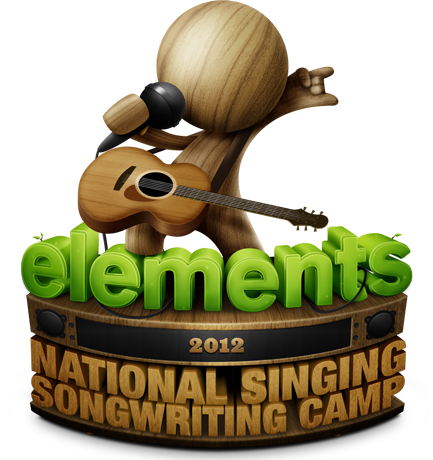 In this year’s fiesta celebration, two Sillimanians were chosen for the Outstanding Dumaguetnons award given by the city government for their exemplary contributions to the community and to the country.  The two alumni awardees are Graduate School professor Atty. Arturo V. Umbac in the field of Public Service, and the former alumni national president Judge Rafael Cresencio Tan, Jr.  in the field of Law. The awarding ceremony was held on November 22 at Bethel Guest House as part of the city’s charter day anniversary. 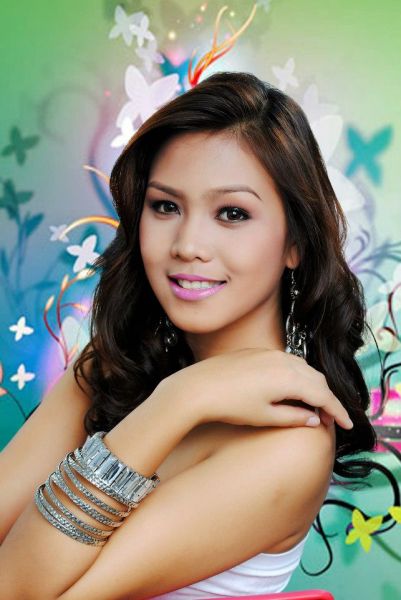 An annual highlight of the Dumaguete fiesta is the search for Miss Dumaguete. This year, all the Top 3 winners are Sillimanians: Ms. Dumaguete 2012 is a senior Pyschology student who is the current Miss Arts and Sciences Frances Claire “Kaye” Arbon Vintola.  The runners-up are: Monica Infante Bartsch and Grifith Irish Marchan.

The Silliman University College of Education, one of the country’s Centers of Excellence in Teachers’ Education, harvested a 100% passing mark for their students who took the National Board Examinations. The first group consisted of four pioneering graduates in Library Science who successfully hurdled the 2012 Librarian Licensure Examination.  A second group is  the Class of 2012, including the pioneering batch of Special Education majors, who also obtained a 100% passing mark in the Licensure Examinations for Teachers (LET) given last September 30.

Two public speaking talents from the High School Department of the Silliman University School of Basic Education were declared champions in provincial and regional elocution competitions. Senior student Mykaela Luz V. Maxino won the provincial Voice of the Youth Oratorical contest on November 6 sponsored by STI, Department of Education and National Youth Commission. She will represent Negros Oriental in the regional finals in Cebu City. In another contest, sophomore student  Jude Martin Amiscaray was adjudged champion in the regional round of the Voice of the Youth (VOY) impromptu speaking competition held last November 23 in Cebu. Sponsored by the Rotary Club, Amiscaray will represent the Visayas in the national finals on February 22 in Manila.

The team of the Silliman University College of Law was adjudged winner in the elimination round of ANC News Channel’s weekly nation-wide television debate program broadcasts. Silliman Law juniors Rochelle Rea Lu, Kenny Melody Hotingoy and Micah Stefan Dagaerag took the negative side and won against St. Louis University-Baguio (SLU) on the motion “Let it be resolved that the Bangsamoro Framework Agreement is unconstitutional.” Hotingoy also got the Best Speaker award.

David Mupe of Congo, president of the Higala International Students from Around the World (HI:SAW),  led  twelve students of different nationalities in a round table discussion on the educational system of their respective countries at the American 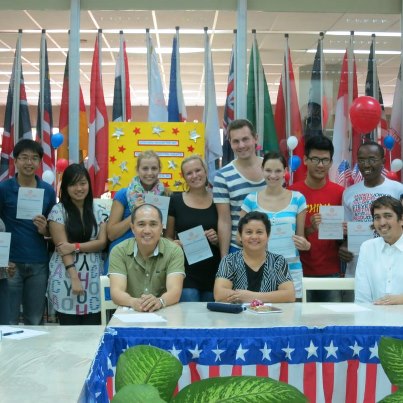 Studies Resource Center-Silliman University Library on November 13. The activity was meant to foster understanding on the value of education and promote awareness of the participants' diverse cultures in relation to the celebration of the International Education Week, November 12-16, 2012, on the theme: “Striving for a Healthier Future Worldwide.” Mr. Moses Joshua Atega, the adviser of HI:SAW, and Prof. Regan Jomao-as from the History and Political Science Department were the guests of the event. Prof. Jomao-as, an adviser of Silliman University-Philippine American Educational Foundation (PAEF) shared some salient points of PAEF as well as his experiences in U.S. education, having been being a Ford Foundation scholar himself.

Psychology professor Dr. Margaret Helen Udarbe-Alvarez, Dean of the College of Arts and Sciences, was elected president of the Asian Christian Faculty Fellowship (ACFF)-Philippines during its 6th Biennial Conference held recently at Silliman, on the theme “Educators’ Response Towards Care of Mother Earth”. The keynote speaker was Dr. Betty Cernol-McCann, Vice President for Programs of the United Board for Christian Higher Education in Asia. Among the paper presenters were Dr. Hilconida Calumpong, Director of the Silliman Institute of Environmental and Marine Sciences, Prof. Santiago Utzurrum, Director of Silliman Off-Campus Development Projects, Dr. Ridling Margaret Waller, President of Women’s Christian College in Janai, India, and Dr. Angelina Gutierrez of St. Scholastica’s College, Manila.

As program officer,  she will be responsible for collaborating with the program teams  in overseeing thematic and country-based programs of academic institutions in Asia.  She started working last October 2012.

Silliman’s pride Mr. Paul Pfieffer was recognized with the Garbo sa Bisaya award given by the Visayas visual artists, during the culminating event of the 12th Visayas Islands Visual Arts Exhibit and Conference (VIVA EXCON) on November 10 at the Luce Auditorium. Pfeiffer is a multi-awarded Filipino-American video artist who was Newsweek America’s Artist of Tomorrow and winner of the Whitney Museum award.

Miss Susan Lara, a loyal member of Silliman’s Literary family, has been appointed Director-in-Residence of the 52nd Silliman University National Writers Workshop (SUNWW). Ms Lara, who resides in Manila, has been coming every summer to serve as panelist at the SUNWW. Lara is a member of the Board of Directors of the Philippine Chapter of International P.E.N., and founding member and treasurer of the Creative Writing Foundation, Inc.  As Director-in-Residence, she will help in the selection of fellows and panelists to the 52nd SUNWW, and the continuing evaluation of its programs and thrusts. The Silliman University National Writers Workshop is now accepting applications for the 52nd National Writers Workshop to be held 6—24 May 2013 at the Silliman University Rose Lamb Sobrepeña Writers Village. This Writers Workshop is offering twelve fellowships to promising writers in the Philippines who will be provided housing, a modest stipend, and a subsidy to partially defray costs of their transportation. To be considered, applicants should submit manuscripts in English on or before 15 January. For inquiries, email: [email protected] or call 035-422-6002 loc. 350.

IN MEMORIAM: Alpha Phi Omega President Emeritus Melchezedec Y. Maquizo (AB 1964, MA 1968) on November 24, Bernardo V. Silava Jr.(Agriculture 1971) on November 24, and young lawyer Farley Bation Daque (BBA Management 1992) on November 24.  If you know of any Sillimanian who is not on our memorial list, please inform us.

The Officers and Staff of the Alumni and External Affairs