There was much opportunity for Christmas giving in December 2012 as Dumaguete becomes the new typhoon “destination.” Dr. Angel C. Alcala observes, “it is vulnerable to tropical depressions developed during the north monsoon season.” He urged the local government to accept the reality of climate change and join him in the conclusion that “Dumaguete is not an ideal port because it is not in a well-protected harbor area.” In Siquijor, fishermen saved four crewmen and the boat captain of the ill-fated Delta 1 fast craft, which sank in the afternoon of December 4. The boat moved out of 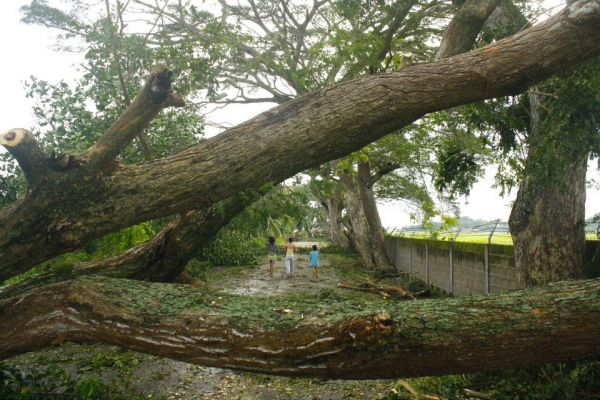 Dumaguete to seek shelter at the height of Typhoon Pablo's fury. Typhoon Pablo, later just before sunset, destroyed not just some parts of the port and uprooted some of the agoho trees along the boulevard but rendered so many families homeless.  Gifts for the victims came from Sillimanian circles here and abroad. With the generous giving, Christmas was somehow felt by the affected homes like the family of the laundry woman Manang Josie and her blind husband Menardo. The couple and their children now live in a tent as their house is now beyond repair as it was destroyed when the eye of the storm hit the province.  Furthermore, the Silliman rescue team was busy helping these families, and in one of the barangay chapels, the Silliman fire truck became the “wedding car” of the newly-weds and their families who came out from a flooded chapel. That wedding in December was indeed extra special with the unexpected “escape truck” twist.

On another note, our beloved City of Dumaguete received two “gifts” last December. First, Dumaguete emerged as the champion after a series of evaluation and validation from the regional GPL team composed of representatives from the different national agencies. The GPL or The Gawad Pamana ng Lahi Award is an honor recognizing excellence in good governance.  The Aquino government, through the Department of Interior and Local Government, recognized Dumaguete LGU’s transparency and accountability efforts which were evidently distinctive from among the various local government units nationwide. Silliman alumnus Dumaguete Mayor Manuel Sagarbarria was happy to receive the three million peso cash prize which will be utilized for a chosen project. The awarding was held on December 14 at the Cebu Grand Hotel. After receiving the DILG-Gawad Pamana ng Lahi Award, the Mayor also announced that Dumaguete made it to the top ten in the Galing Pook Award for its best practice in environment. Mayor Sagarbarria announced that the coveted Galing Pook Award will be given for the City’s Wastewater Treatment Plant in barangay Camanjac. Dumaguete was selected as one of the Galing Pook Awardees out of 122 cities all over the country. Mayor Sagarbarria is scheduled to receive the award in Malacañang in January.

Further, the Silliman University Church staged a Christmas benefit concert dubbed as “This Little Light of Mine” on December 16 at the Luce. The Christmas special, aired on Fil-Products cable television, featured the SU Church Children’s Choir with the support of the Ating Pamana as directed by Dr. Elizabeth Susan Vista Suarez. It also had the music of the Silliman Church’s Just To Make A Difference Praise Team (J2MAD).  Proceeds from the concert went to help in the acquisition of a new Allen organ needed for use at Silliman Church. Likewise, alumni groups in the United States led by the SUACONA made commitment to help raise funds to acquire the Allen organ.

Eve Ensler’s visit to Dumaguete City on December 18 was every VDay activist’s dream realized. It went beyond everyone’s expectation.  Ensler is author of the phenomenal book  The Vagina Monologues.  VDay prime mover in Dumaguete, Michelle Joan Valbuena expressed, “never did I think in my life before that I would meet Eve Ensler 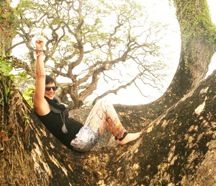 in person, talk to her at an intimate distance, hug her, and be hugged back and kissed on the cheek — and all of these happening right here in Dumaguete.” The play, meant to open the audiences’ heart and mind to support the advocacy to end violence against women and children, has been mounted almost every year at the Luce Auditorium. For the last 10 years since 2001, actors and production teams of this play have become the loyal supporters of VDay Dumaguete.  Philippine National VDay director Monique Wilson was with Eve in the forum to call for a stop to violence.  Professor Valbuena shared a collection of the birthing stage of VDay at Silliman, “when we first staged The Vagina Monologues (TVM)… by New Voice Company, we had to go through the eye of a needle. We could not get sponsors because it was ‘vagina.’ Some of the administrators at Silliman, even when they supported TVM, had suggested to change the title to The V Monologues or to print “Vagina” in smaller fonts, just so we could be successful at staging it. “Next year’s VDay theme is One Billion Rising (OBR), the goal is to have one billion women from around the world will rise together on Feb. 14, 2013.  The forum with Eve Ensler at the Luce was the launching of OBR Dumaguete. VDay supporters are hoping to see the entire community to strike, to dance, and to rise with the women on Valentine’s Day.

Addressing one of controversial issues today, the Dr. Jovito R. Salonga Center for Law & Development conducted a forum on The Cybercrime Prevention Act of 2012 (RA 10175) on December 11 at the SU Justice Aldecoa Jr. Moot Court. The chairman of the Office of the Cybercrime of the Department of Justice, Assistant Geronimo L. Sy came to speak on the topic.

In his lecture, Assistant Secretary Sy clarified some of the most frequently asked questions about cybercrime: 1) data privacy, 2) cybercrime, and 3) cyber security.  He said their proposed version of the cybercrime law seeking to conform to the Budapest Cybercrime Convention was to address only the core cybercrime i 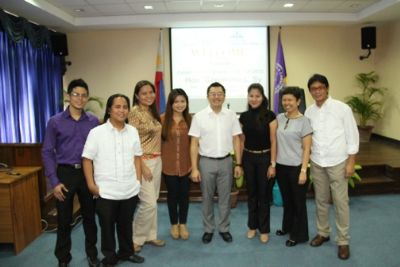 ssues but the current version of the law passed by Congress contained many unnecessary provisions, including provisions on libel and child pornography, which he quipped were only inserted at the last minute.  Aside from Sillimanians, the forum which covered Republic Act 10175 otherwise known as the Cybercrime Prevention Act of 2012 approved on Sept. 12, 2012, was also attended by the teachers and students from schools in Dumaguete.

Into the Woods, one of Broadway’s legendary musicals, had a successful staging at the Claire Isabel McGill Luce Auditorium on December 7 to 8.  The show features music and lyrics by Stephen Schwartz, and book by James Lapine. Into the Woods, which has cemented Sondheim’s position as the giant of the American musical theater, is the story of a baker and his wife who journeyed into the woods in search of a cow, a red cape, a pair of golden slippers, and some magic beans to lift a curse that has kept them childless. The play becomes a seamless fusion of fairy tale characters and what really happens after “happily ever after.” The musical showcased Silliman University thespians and singers, directed by Theater department head Vanessa Gaspay-Nezamloo, with musical direction by Dr. Elizabeth Susan Vista-Suarez. The local production was sponsored by the Silliman University Cultural Affairs Committee, as part of its 50th Cultural Season.

IN MEMORIAM: Romeo Anfone Nacario (SUHS 1957, Education 1965) on December 3; Hazel T. Rendal (SUHS 1972, Social Work 1977) also on December 3; Lorna Deloria Perez (Nursing) on December 12; and Silliman Religion textbook author, teacher and program pioneer Dr. Douglas Elwood on December 31. If you know of any Sillimanian who is not on our memorial list, please inform us.

The Officers and Staff of the Alumni and External Affairs