Affirming Varieties of Service through the Annual Diakonia Awards 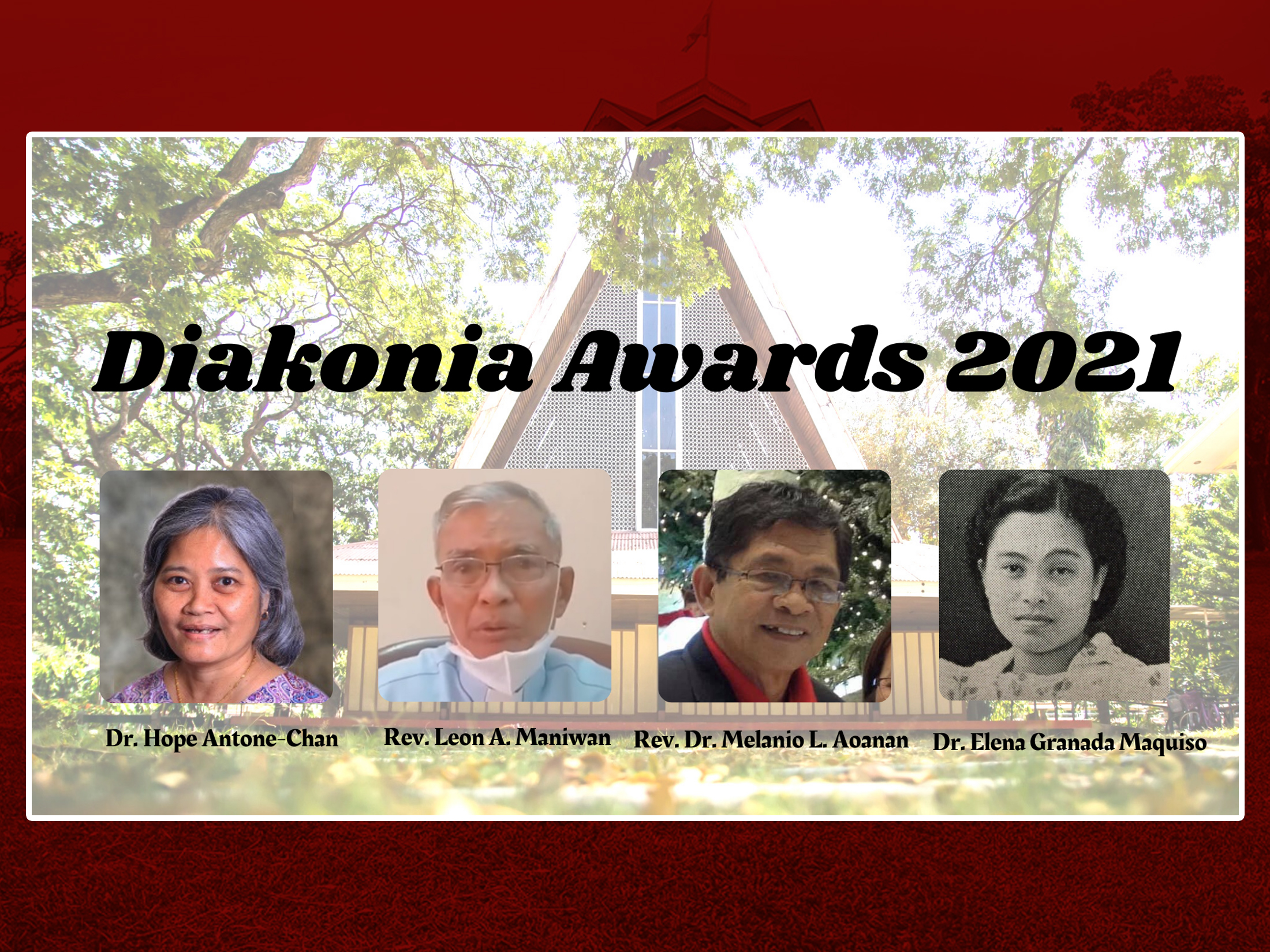 Affirming Varieties of Service through the Annual Diakonia Awards

“And he (Jesus Christ) gave the apostles, the prophets, the evangelists, the shepherds, and teachers, to equip the saints for the work of ministry, for building up the body of Christ, until we all attain to the unity of the faith and of the knowledge of the Son of God, to mature manhood, to the measure of the stature of the fullness of Christ.” (Ephesians 4:11-13)

For the last century, the Divinity School of Silliman University (SU) has nurtured, equipped, and empowered church workers for the ministry of Jesus Christ, especially for the United Church of Christ in the Philippines (UCCP). But if the 11th verse in Ephesians 4 would be continued, there will be several types of service that can be added aside from being “apostles, prophets, evangelists, shepherds, and teachers.” And so, the list will go on—as theologians, church musicians, hymn writers, cantors, liturgy writers, Christian communication specialists, radio/TV broadcasters, Christian education curriculum writers, school administrators, lay workers, community organizers, development workers, peace workers, human rights defenders, interfaith dialogue workers, labor union leaders and so on.

While it is true that the Divinity School has produced thousands of pastors for local churches, conferences, and jurisdictions, it cannot be denied that the formation center has trained individuals of varied callings who later excelled in their work of service to the church, to the community, and to society.

The annual Diakonia Awards, for the first time, took the virtual space as the centenary of the Divinity School was held August 28 to 30, 2021 via Zoom. This year’s awardees truly affirm the varieties of service pursued by its alumni after their stay at the formation center. 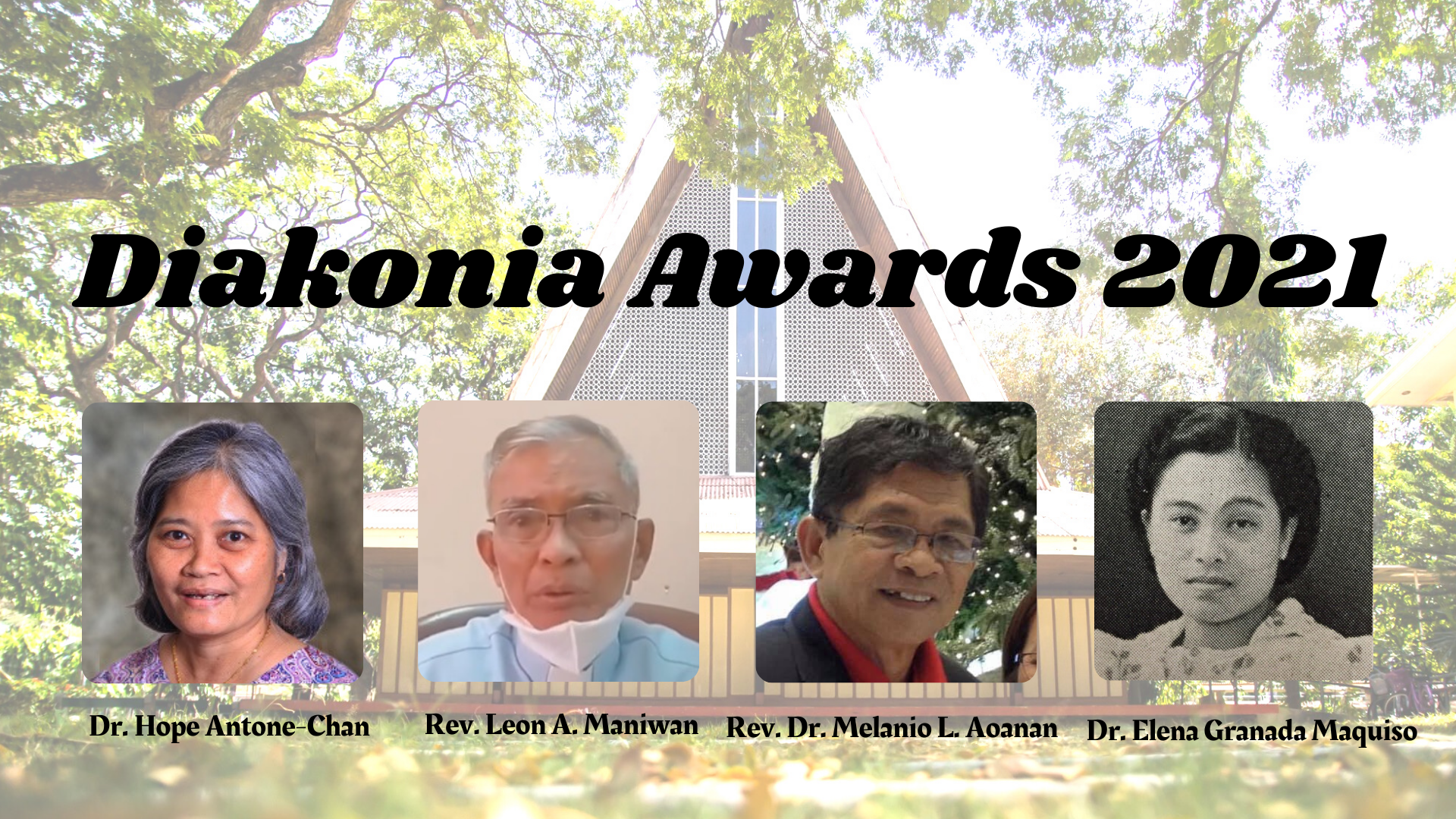 Leading the roster of awardees is Dr. Hope Antone-Chan who was recognized for her work as an “International Christian Educator and as a Feminist Lay Theologian.”

She currently holds the post of Director of the Faculty Development Programs at the United Board for Christian Higher Education in Asia.

Formerly, she worked with the Christian Conference of Asia (CCA) where she developed Bible study materials, led various ecumenical and interfaith programs, and provided editorial leadership in the following publications: CTC Bulletin (Commission on Theological Concerns), CCA News, In God’s Image (Asia Women’s Resource Center for Culture and Theology) and Praxis (World Student Christian Federation Asia-Pacific Region) and was co-editor of the Asian Handbook for Theological Education and Ecumenism.

For her long years of ministry, Antone-Chan worked in the ecumenical movement of Asia and the world over. Through her unique pursuit of the ministry, she has helped empower churches and lay members gear “towards a more relevant ministry in dealing with various social, political, gender and racial issues gripping the societies and communities of various Asian nations.”

As with her current work, “she has enabled the United Board for Christian Higher Education in Asia based in Hongkong to develop more relevant strategies for faculty development in the institutions of higher education all over Southeast Asia geared towards whole-person education; for developing special programs for the institutions in Asia some of which give focus on faith, mission and unity for formal (seminary-based) and non-formal (church-based) settings.”

Another awardee for this year is Rev. Leon A. Maniwan, who was commended for being a “Faithful Servant, a Pastor, and a Reconciler.”

As the citation reads, Maniwan has been awarded for: “his lion-hearted, steadfast, and selfless service to the church since the time he graduated from the Divinity School B.D. program in 1978 up to his days of retirement in Bohol, first in his home conference in Northern Mindanao where he served churches in Tangob City, Baliangao, Misamis Occidental and in Baroy, Lanao Del Norte where he was ordained in 1979.”

The citation also narrates how he moved on to serve churches in Metro Manila such as the Sobrepeña Memorial Church in Quezon City, where he had to “overcome strong reactions of some of his members due to the courageous prophetic witness that his church has undertaken those days,” and in Ellinwood Malate Church where he pastored the Visayan congregation from 1990 to 1995.

“He was then called to provide pastoral leadership to UCCP Bradford Church in Cebu (1995-2004) which was then in the midst of a very divisive conflict. He was able to provide the stability and peace within the congregation and consolidated the unity of the church in such tumultuous times,” continued the citation.

Maniwan’s track record can be marked laudable for being an ordained minister who was able to successfully render genuine service to local churches in Luzon, Visayas, and Mindanao of the UCCP.

At present, he still serves the UCCP La Paz Church in the Bohol Conference. Also, he served as administrative pastor of the Dr. Graham Memorial Church in Tagbilaran City for six years (2004-2010) and was called again to serve as its Emeritus Pastor from 2010-2011.

Another commendable work of Maniwan is his able and successful pastoral leadership even amid conflicts in the churches and conferences where he served.

His effective facilitation of conflict resolution and restoration of strained relationships in the church enabled congregations to survive and grow a more vibrant ministry even after the huge conflicts that struck its narrative.

Aside from that, his commitment to the pursuit of peace, justice, and human rights and prophetic witness can be named as one of his undying passions as a church worker and someone who possessed a love for the country and its people.

Meanwhile, Rev. Melanio L. Aoanan comes as another recipient for this year’s Diakonia Awards for being a “Theological Educator, a Scholar, and a Pastor.”

His achievements include academic and scholarly achievement in his discipline as a teacher of Church History and Ecumenics.

In 1994, he was named as National Awardee for Outstanding Educator in 1994 by the Private Education Retirement Annuity Association and the Department of Education, Culture, and Sports with the citation: “For his valuable contribution to nation-building in the field of education; and for his exemplary services and selfless devotion to the teaching profession.”

Formerly, he served as chair of the Department of Philosophy and Religion of SU; professor in Church History and Ecumenics and registrar at the Union Theological Seminary in Cavite; mentor at the doctoral studies program at the Dela Salle University, Manila; president and faculty member at Southern Christian College in Midsayap; and as the current head of the Master of Theology program at the Brokenshire College in Davao City.

Over the years, Aoanan has produced numerous publications in the field of Church Unity and Indigenous Theology as proven through his new book, “Bituka Theology, Human Rights, Interfaith Dialogue, and Theological Education.”

Despite all these academic pursuits, he never failed to possess the heart of a pastor. He was able to successfully serve as Administrative Pastor of the Church Among the Palms in UP Los Baños and the Paranaque Community Church.

Completing this year’s list of Diakonia Awardees is Dr. Elena Granada Maquiso. Though given posthumously, the award comes as a formal recognition of her work and life as a “Christian Educator, Prolific Hymnwriter, Church Musician, Cultural Advocate, and Faithful Servant of the Lord.”

Maquiso was a mentor in Christian Education at the Divinity School and at the same time, she carried with her the passion for the indigenous culture and the arts which she was able to utilize in indigenizing the worships through the hundreds of hymns she was able to craft and compile in the hymnal, “Alawiton sa Pagtoo” published in 1974.

The original Cebuano hymns expressed “the very heart and soul of the worshipping Filipino reflecting their very own life aspirations, beliefs, and faith in our God.”

Her love for the indigenous culture moved her to immerse and do research with the ethnic communities in Mindanao and eventually, led to her compilation work of Ulahingan, which comes in various volumes.

Her organizing work not only involved the singing group, Banikanhong Magdudula, the cultural arm of the Divinity School which primarily promoted her work of indigenous hymns and songs, but she was also instrumental in the founding of the Kalauman Center for Development of which she was the first director.

The said organization has changed thousands of lives through the livelihood programs and scholarships given to children from urban poor communities of Dumaguete City and its nearby towns.

Maquiso’s passion for Christian Education motivated her to excel in teaching through more concrete and down-to-earth means the basic tenets of the faith. Since the day she passed on to the great beyond on June 17, 1995, she has always been remembered by the alumni and fellow faculty members, “for being a teacher who taught with so much passion and compassion, love for the word, and devotion to praise and music.”

The Divinity School’s conferral of Posthumous Award to a beloved teacher, Dr. Elena Granada Maquiso, during its centenary,  comes as a celebration of her life and work, and her legacy of faith translated through the gifts of teaching, music, arts, and the love for our own culture.

Over the years, the Diakonia Awards celebrates and affirms the varieties of gifts and the varieties of services pursued by the Divinity School’s alumni in the church, in the community, and the wider society. The alumni’s life spent in the service of the church and society comes serves as a beacon of light and spring of hope in their respective communities.

After all, at the end of their stay at the formation center during the commissioning service, each alumnus is sent forth to the world to serve in various ministries and callings, and to bear the light of Christ in their respective communities.